Jan Van Leuwen was a VOC merchant who had sat in judgment of the English at the original trial in Amboyna in 1623. In this deposition, which was recorded some years after the trial, he attacked the notion that the plot was impossible by suggesting that the conspiracy involved a number of different groups who once combined together could easily have overwhelmed the Dutch. 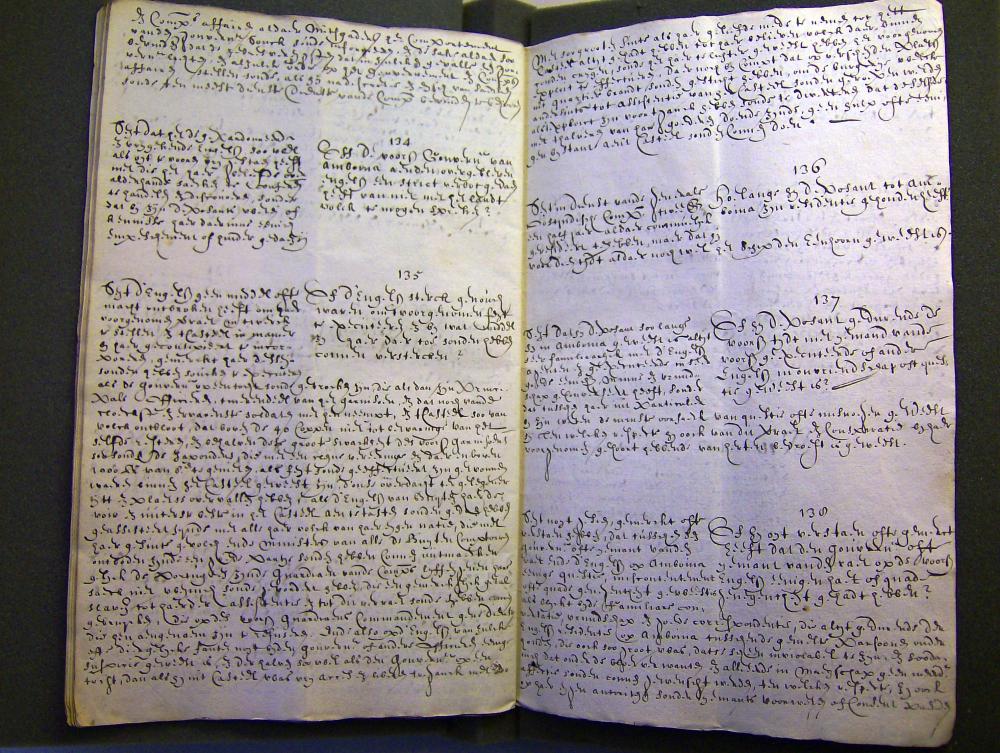 Question - Were the English strong enough to execute this treason and how could they have strengthened themselves for it?

Answer - Said the English did not lack any mean or power to execute their intended treason to incorporate the castle in a way plotted by them, would have, seeing their design, search to execute [it] when the governor would have left on voyage, who then would have taken his principal officers, most of the garrison and the bravest and most experienced soldiers at that and then the castle [would be] without people, except for the 40 heads that would have stayed and without this large heaviness of said garrison the Japanese that already received small presents and moreover 1000 Ra. of eights if the plan would have succeeded [they] would have come into the castle and would have unexpectedly attacked us in time and place while the English would do their duty and best form the outside to harm the castle assisted by all her people of their own nation who with their people and ministers summoned of all the factories making a good amount, as the Portuguese being head of the Company’s slaves would have furthered their case much, who could have used a remarkable amount of slaved to their assistance for this treason who are under said head’s commandment and are not used to refuse services that are unpleasant for them. And as there was never any suspicion with the governor or his other officers for the English on such and the same flaws, and therefore even when the governor was on expedition, as when he was out of the castle as they always had, free access and free entry with large suite as they pleased to bring as and could have easily brought as many people as they pleased inside, they could have carried their intended exploit into effect, moreover they would set fire to various places in the quarters to divert the citizens would have normally been called to assist the castle if the exploit would have happened that the said [citizens] would be saving their goods and would have not been able to help or give any assistance to the castle.

Deposition of Jan van Leeuwen, Staten Generaal 12551.61.1, Archief van de Staten-Generaal, Nationaal Archief, Den Haag
1. What kind of co-ordination would a plot with so many different groups have entailed?