The Amboyna trial lasted for roughly two weeks and was presided over by the senior legal official on Ambon, the Advocate-fiscal, Isaaq de Bruyn. De Bruyn was a new arrival to Asia and he is conventionally described in Dutch sources as either as a “jurist (rechtsgeleerde)” or as a “doctor and jurist” (doctor ende rechtsgeleerde). The problem was, however, that he appears to have been strikingly incompetent. In this he was not unique as the Company struggled to recruit trained legal officials willing to undertake the long and dangerous journey to Asia, but De Bruyn stands apart because his many mistakes were picked apart by English critics in the decade after the trial. De Bruyn’s ineptitude, which would spark decades of dispute, is readily on show in the key document for the trial, the Confessions and Sentences of the Murderous Conspiracy at Amboyna, which skipped over a number of key procedures conventionally used in trials of this period.

The legal case at Amboyna was attacked ferociously by English writers, who argued that it violated the most basic principles of justice. What is so striking in this document is that the condemnation comes not from the English but from De Bruyn’s own superiors in Batavia, who were clearly appalled by the shoddy trial record which they forced to defend. Here, they describe De Bruyn in scathing terms as someone who has passed himself off as a lawyer but who clearly lacked the basic skills to conduct the case. Although the Governor-General was absolutely convinced that the English were guilty, he is clear that it would have been far preferable if the Dutch on Amboyna had shown clemency rather than executing Towerson and the other alleged conspirators at Amboyna. 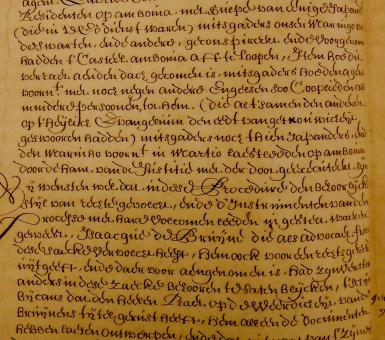 We would have wished to have seen the proper legal procedure observed in this case its Instruments drawn up with greater completeness. Isaacque de Bruyne, who as Fiscal acted as prosecutor in this case, and moreover passes himself off as a lawyer and has been appointed as such, ought to have turned his common sense to better account in it. It would seem that the entire council relied on the prestige of De Bruyn’s title and left him to draw up the documents all by himself, and that none one of its members dared add anything, but wholly trusted to the lawyer’s title…We have now come to the conclusion that the severity of justice might have been tempered a little with Dutch clemency (with respect to a nation that is so close a neighbor).