In June 1624, six survivors of the Amboyna Conspiracy Trial arrived in London to a rapturous welcome. They were John Beamont and Edward Collins, who had pleaded guilty to involvement in the plot against the Dutch but were reprieved at the last minute by the VOC governor, as well as John Powle, William Webber, George Sherrock and Ephraim Ramsey who had been found not guilty of any involvement in the plot and acquitted by the tribunal The ‘Amboyna men,’ as they were invariably called, became instant celebrities and were given a heroic reception in London where they were feted by EIC officials and presented before prominent aristocrats. They also testified before the Admiralty Court from 7 to 13 July 1624 and this testimony would be used to explosive effect to attack the original trial proceedings.

This is a sworn deposition provided by John Beaumont, who was convicted in the Amboyna trial but later spared. In his deposition, Beaumont condemns the Dutch as brutal torturers. As the excerpt also makes clear, he suggests that the whole Amboyna trial was a premeditated move by the Dutch designed to expel the English from Amboyna and hence secure access to the lucrative spice trade. In this way, it was not simply that the Dutch made a mistake at Amboyna. Rather, they had planned the whole trial as a way to eject the English from the spice trade. Accusations like this were subsequently picked up in Skinner's pamphlet and transmitted to a wider audience. 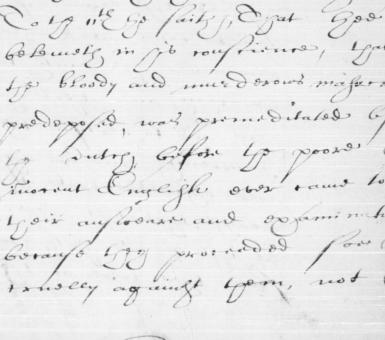 To the 11th he saith, that hee beleeveth in his conscience, that the bloody and murderous massacre predeposed, was premeditated by the Dutch, before the poore inocent English ever came to their answeare and examinations because they proceeded soe cruelly against them, not seeinge any ground soe to doe, And otherwise to this article hee cannot depose.