As English writers moved to undercut the whole basis of the case, Dutch East India Company officials were compelled to defend waterboarding. They did so by commissioning a document from the senior legal official in the Dutch empire, who argued that waterboarding was quite different from other torture techniques because it inflicted no actual physical harm. This argument would appear in multiple pamphlets and it would become a standard part of the debate over Amboyna. In contrast, English writers argued that waterboarding was in fact brutal torture and that any information extracted using this technique was fundamentally unreliable.

Source: Declaraton on torture by the bailiff of Batavia, 7 October 1625

In this memorandum, the senior legal official in Batavia, the bailiff, responded to English complaints about waterboarding. He explained, first, that torture was common and was used widely (and legally) across the Dutch empire in Asia. But he also attempted to distinguish waterboarding from other kinds of more severe torture. In this way, he asserted “that the torture with water” is the “most civil” of all such techniques because it causes “less pain than the torture generally used across Europe, which is always considered more severe, heavier and more dangerous than the one with water, in which neither the health of the person nor any limb of their body is hurt or mutilated.” Thus it was fundamentally different, this document, asserts from other kinds of more brutal torture that might result in the breaking of bones or the severing of limbs. Here we see a very similar justification to the one employed in the infamous 2002 torture memo in which the Office of Legal Counsel argued that for something to be torture, it had to involve serious physical harm such as involving, for example, organ failure or the impairment of bodily functions. In other words, both in the seventeenth century and again in 2002, waterboarding did not (so the argument went) qualify as proper torture because it did not inflict permanent physical harm on the subject. 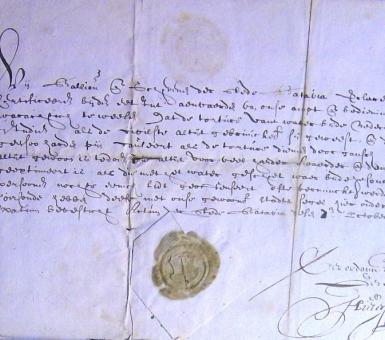 "The bailiff and sheriffs of the town of Batavia declare and certify ... that it is true that the torture with water has always been used by the Dutch in India as being the most most civil and causes less pain than the the torture generally used in all Europe, which is always looked upon as much more painful, much harder and more dangerous than the one with water, whereby neither the health of persons nor any member of their body is hurt or mutilated, To certify this we have fixed our usual seal of the town at the bottom hereof."