Coen’s vision of Japanese troops was not shared by everyone in the Company.  While their superiors in Batavia made bold statements about the value of Japanese troops, VOC officials tasked with carrying out these instructions were far less persuaded that these were the right recruits to fill the organization's labor shortage.  This was the case with Jacques Specx, the chief merchant or opperhoofd in Japan, who had the difficult task of actually recruiting hundreds of Japanese mercenaries and shipping them off to Southeast Asia.  Specx cautioned that it might not be so easy to harness the warlike energies of Japan as his superiors imagined. The Japanese, he explained, “are dangerous to govern outside their land.  If things do not go to their liking or when badly treated, they at once take a desperate attitude, which in their land would be prevented by rigorous justice or rather by tyranny.  In this way they are lambs [in Japan] and like devils outside their land.”

Specx sought to control the Company’s new recruits by binding Japanese mercenaries to draconian contracts that would ensure this subservience. He explained that all the new recruits had been placed “under an appropriate oath and articles that I put together and translated in the Japanese language and writing.” The contract itself is included here. It begins much as a standard VOC contract that was issued to thousands of Dutch sailors and soldiers but becomes steadily more draconian. The recruits were to submit to total control by Dutch authorities and to pledge their willingness “to be used in any way by the captain, on the ship as well as ashore.” They were not simply to accept all these orders but they were never to speak back, pledging they “will not speak back when given orders by the boatswain.” But the key provision was that at any attempt at violent resistance would result in the most terrible consequences. They must “never oppose with threats the captain or other authorities, nor attack their persons.” If they were to do these things, the punishment would be swift and absolute and it would extend beyond their persons. In this way, the document went much further than standard contracts by threatening to punish the “parents, wives, children and those standing security for them” if the recruit violated his oath. The intent of the contract is clear: to bind Japanese mercenaries and their families in a web of legal responsibilities that would ensure their absolute obedience to the Company. 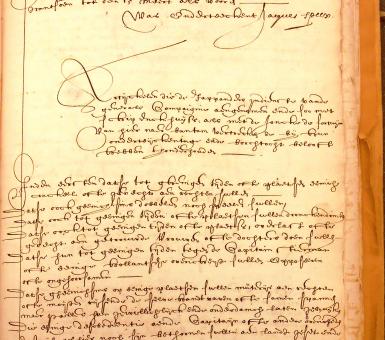 “Articles that the Japanese in the service of the Company sailing to Bantam aboard the ship Enckhuijsen and the junk Fortuijn to Bantam have agreed and promised to uphold by their signatures.

In the year and age named Iewa guannien [first year of Genna] in the 11th month and 11th day.”

This is a portrait of Jacques Specx, the long-serving chief merchant for the VOC in Japan who would later rise to become Governor-General in Batavia from 1629 to 1632. Here he is shown surrounded by objects connected with Japan, signifying his long tenure in that country.