The Torture By Water

Torture stands at the center of the Amboyna trial and much of the subsequent controversy has centered on the use, legality and efficacy of the torture techniques employed during the legal proceedings. The particular technique that was used is described as the ‘torture by water’ in contemporary sources but is now more commonly known to us by a different label as waterboarding. Waterboarding works as a torture technique not because it causes excruciating pain but because it creates the “perception of drowning.” According to one of the Amboyna judges the torture causes “greate anguish by hindrance of his breath, but cannot cause anie lamelesse or other unsoundenesse.” A modern journalist, who volunteered to subject himself to the technique, describes the experience as follows: you “feel that you are drowning because you are drowning—or, rather, being drowned, albeit slowly and under controlled conditions and at the mercy (or otherwise) of those who are applying the pressure” (http://www.vanityfair.com/news/2008/08/hitchens200808)).

This is a contemporary description of a torture technique known as waterboarding. It should be compared with a description of waterboarding that was detailed in a controversial document, the so-called torture memo, which was prepared by the Office of Legal Counsel in August 2002. This memo was written to provide legal justification for techniques collectively labelled as ‘enhanced interrogation’ that included waterboarding. Comparing Dutch descriptions of what happened at Amboyna with the 2002 document reveals an almost word for word match. According to the latter, the waterboarded individual was “bound securely to an inclined bench. A cloth is placed over the forehead and eyes. Water is then applied to the cloth in a controlled manner. As this is done, the cloth is lowered until it covers both the nose and mouth… [This] produces the perception of ‘suffocation and incipient panic,’ i.e. the perception of drowning.” Waterboarding was thus designed to produce "greate anguish by hindrance of his breath" and there is a clear parallel between Amboyna and the techniques used by the Bush administration. 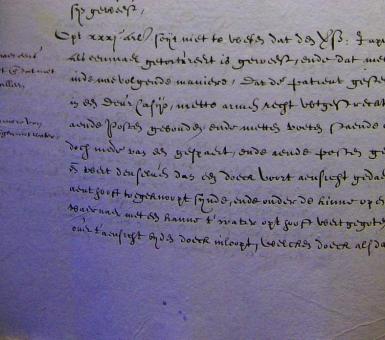 He saith that he doth not knowe that the said Japponese was tortured more then one time, to wit with water, in manner following, the patient was set in the porch of a dore. His Armes being retched forth and bownde fast unto the postes, his feete standing upon the grownde, neverthelesse being parte asunder and bownde to the postes, this porch being as an ordinarie Chamber dore, the holes being made through the postes, did then a cloth or cloute was put before his face and fastened behind his head, hanging upon under his chinne, after this the water was poured upon his head, that it might runne downe his face, and then this cloth is closed with a mans hand under his chinne, And this manner of torture doth onelie cause a greate anguish by hindrance of his breath, but cannot cause anie lamelesse or other unsoundenesse, and this anguish presentlie ceaseth with the opening of the cloth, which is done when one doth thinke the patient cannot endure noe more, so saith further that this manner of torture is an ordinary manner in those places which formerlie he hath seene severall times applyed unto Dutchmen and other nations.