The Amboyna conspiracy trial produced a surge of competing pamphlets, complete versions of which can be seen here. This commenced in July 1624 when a pamphlet entitled A True Declaration of the News that came out of the East-Indies, was printed in Dutch and later translated into English. It was followed by an English pamphlet, A true relation of the uniust, cruell, and barbarous proceedings against the English at Amboyna in the East-Indies by the Neatherlandish gouernour and councel there, that was drawn up by John Skinner. In 1632, the pamphleting war was renewed when a further set of three pamphlets from both sides were published together. The first part, A remonstrance of the directors of the Netherlands East India Company presented to the Lords States Generall of the united Provinces, in defence of the said Companie, touching the bloudy proceedings against the English merchants, executed at Amboyna, was an answer to Skinner’s pamphlet and came with a translation of the Amboyna judicial record. Again, the English responded in the form of A Reply to the Remonstrance of the Bewinthebbers or Directors of the Netherlands East India Companie which worked through each of the arguments put forward and attempted to demolish it. The value of these pamphlets as historical sources is debatable but they were crucial in shaping the public reaction to Amboyna.

Source: A true relation of the uniust, cruell, and barbarous proceedings against the English

This is an excerpt from a pamphlet produced on the English side in 1624. The purpose of this pamphlet was to damn the Dutch as brutal murders who had deliberately fabricated a conspiracy as a pretext to eject the English from the spice islands. Its author, John Skinner, collected the most explosive testimony presented by the Amboyna survivors and then proceeded to exaggerate it for effect. This scene is a good example and it seems have been largely invented. In it, the English are presented as virtuous, godly victims in sharp contrast with the villainous Dutch. Not only do the English merchants at Amboyna go to their deaths with a pure conscience, but they in fact forgive the Dutch for their terrible crimes against them. Scenes like this fanned the flames of anti-Dutch sentiment in England in this period. 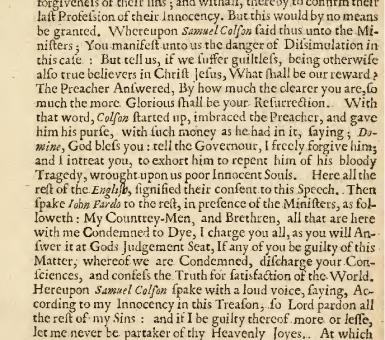 The English still professed their innocency, and prayed the ministers that they might all receive the sacrament, as a zeal of the forgiveness of their sins, and withal thereby to confirm their last profession of their innocency. But this would by no means be granted, whereupon Samuel Colson said thus unto the ministers: You manifest unto us the danger of dissimulation in this case; but tell us if we suffer guiltless being also otherwise true believers in Christ Jesus, what shall be our reward? The preacher answered, by how much the clearer you are, so much the more glorious shall be your resurrection. With that word Colson started up embraced the preacher, and gave him his purse with such money as he had in it, saying, Domine, God bless you. Tell the Governor I freely forgive him; and I entreat you to exhort him to repent him of this bloody tragedy wrought upon us poor innocent souls. Here all the rest of the English signified their consent of this speech.

Citation: A true relation of the vniust, cruell, and barbarous proceedings against the English at Amboyna in the East-Indies, by the Neatherlandish gouernour and councel there, John Skinner, London, 1624

In an effort to calm the waters and responding to English pressure, the States-General reacted to the publication of the first pamphlet, Waerachtich Verhael vande Tidinghen ghecomen wt de Oost-Indien (A True Declaration of the News that came out of the East-Indies), by issuing this placard that declared it libel. While this was designed to contain the controversy about Amboyna, it was impossible to suppress the steady stream of news concerning the trial. In this period, pamphlets were both powerful and ubiquitous publications designed to sway public opinion and effect policy. A list of pamphlets produced in the Netherlands in this period is available here 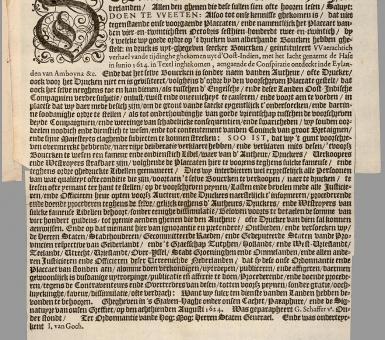 Placard of the States General, against a pamphlet entitled, "The true relation of the tidings which came out of the East Indies by the pinnace called the Hare (which arrived at the Texel in June 1624), concerning the conspiracy which was discovered in the Islands of Amboyna, &c.," declaring it to be "a scandalous and senseless libel, the author whereof, as also the printers, sellers, and dispersers, ought to be punished;" requiring all justices and officers to make diligent inquiry after and proceed against them; and promising a reward of 400 guilders to whomsoever shall produce the author or printer. [This translation comes from the Calendar of State Papers Colonial, East Indies, China and Japan, 1622-1624]